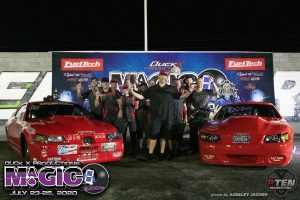 Miller, who operates out of his Miller Race Cars shop in Connecticut and is a world-renowned tuner with the Pro Line Racing team, was tasked with overseeing Buginga’s entries in both the Pro 275 and X275 categories at Magic 8. Although Buginga himself was unable to attend due to Covid-19 complications, he put his faith in Miller and the man did not disappoint.

Prior to the event, however, a test session to prepare “Magic Eyes” Eric Dillard and Buginga’s ProCharged Mustang produced a 3.780 at 196.42 mph pass. If it had been made in competition, the run would have undeniably reset the elapsed time world record for the class, and the 0.976-second 60-foot time showed exactly what the PLR Hemi engine and FuelTech FT600 system are capable of with Miller managing it all.

In Florida, the event kicked off on Thursday with another test session and Miller got to work dialing in both the Pro 275 entry driven by PLR’s Dillard as well as the turbocharged X275 Mustang known as “Big Red” driven by Blake Copson. The evening’s qualifying was cut short due to rain, but Miller was confident in his plans and didn’t let the setback phase him in the least.

Qualifying continued on Saturday evening and things picked up as Miller worked to dial in both combinations. After six sessions had been completed and the orders finalized, Copson topped the X275 list with a stout 4.268 at 165.68 mph pass while Dillard was poised to strike in second with his 3.842 at 194.30 mph hit in Pro 275.

With the Mustangs ready to do work, the Buginga group commemorated the occasion with a special photoshoot on Sunday prior to the official class photos for the event, then began eliminations promptly at 7 pm. Miller both planned and promised to put Buginga’s two cars into the winner’s circle, and that’s exactly what he did.

Elite 8-car fields were set for both classes, and Dillard defeated Marty Stinnett in round one going 3.840 at 193.24 mph. In round two, Dillard got the win once again, this time over James Miron with a 3.824 at 193.43 mph blast. Paired with the number five qualifier in the finals, Tommy Rainer, Dillard dominated from the start to the stripe with a 3.836 at 193.88 mph pass to turn the well-deserved win light on in his lane.

Meanwhile, in X275, Copson didn’t disappoint and expertly worked his way through the field. He ran unopposed in round one with a 4.413 at 164.05 mph round one and took down Dean Marinis with a 4.254 at 166.14 mph in round two. In the finals, Copson faced off against Charles Hull who had qualified second overall. Both men wanted the win, but Copson clinched it as his 4.259 a 164.83 mph time slip doubled up the successes for Buginga and Miller with a clean sweep of the weekend.

Thanks to Miller’s masterful guidance and expertise, both of Buginga’s Mustangs made it to the winner’s circle at the conclusion of the Magic 8 race with Dillard, Copson, and the rest of the crew enjoying their victories.

Ainsley does it all at P.TEN. Seriously. From marketing to graphic design, website development to social media management, photography to journalism, and much more, she's got a hand in pretty much everything we do!